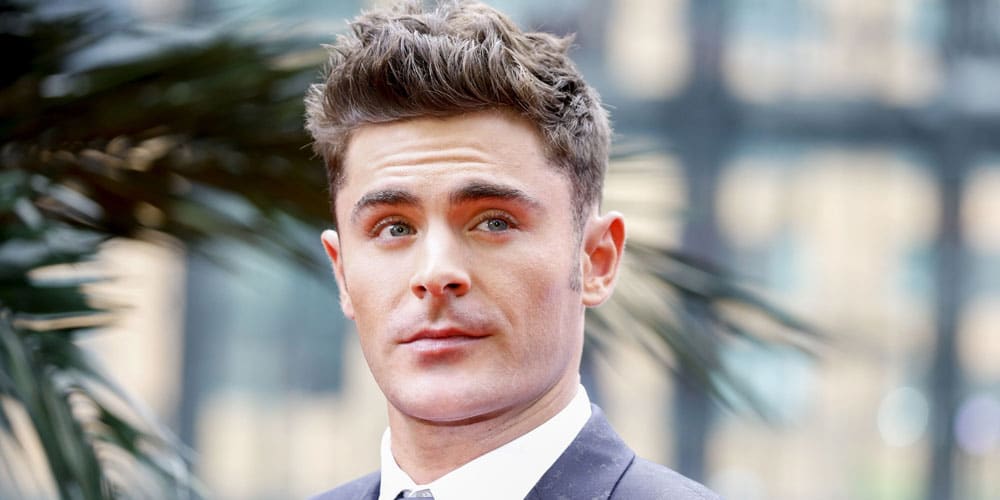 Zac Efron’s hairstyles have provided tons of styling inspiration for men around the world. While the actor has made a major transformation from his teen days as a heartthrob in Disney’s High School Musical franchise to a well-respected actor starring in major films, Efron’s hair has always been on-point.

Throughout Efron’s rise to fame, the celeb has worn his short and long hair in a variety of different ways. In recent years, Efron hasn’t been afraid to try new cuts and styles, whether it’s for an award show, a new movie role, or as a permanent look. Now an established movie star, Efron has figured out what works best for him. Here’s a guide to the best Zac Efron hairstyles over the years!

Zac Efron’s haircut always seems to be perfectly trimmed and styled. From his crew cut and buzz cut to spiky hair and quiff, this celebrity knows how to style the hottest looks for any occasion. Let’s take a look at how to get Zac Efron’s hair as well as the best products to use for his styles. 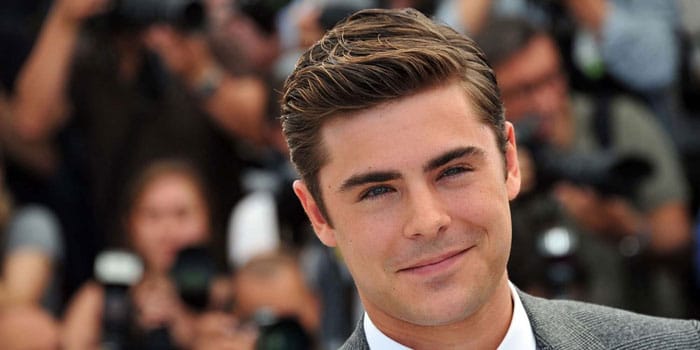 Zac Efron’s long hair of his younger days got the cut when he buzzed his hair into a short yet stylish crew cut. Representing a more mature and masculine look than shaggy hair, Efron’s short haircut starts with faded sides and ends with slightly longer hair on top. Here are a few examples of the actor’s popular short hair. 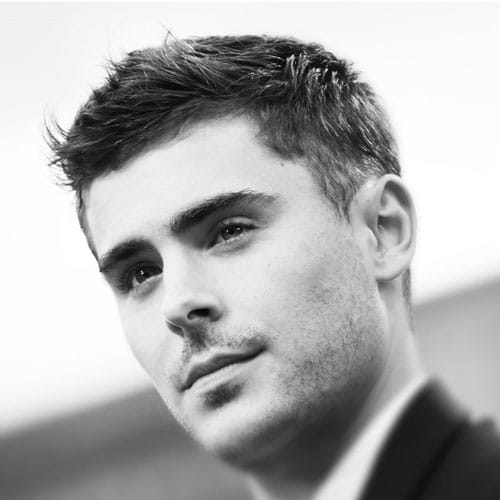 The Ivy League hairstyle, as the crew cut is commonly known, is a classy look all guys can get. This cut is often very easy to manage because it’s short enough that it doesn’t need to be styled daily, as long as the barber does a spotless job with even cuts and straight edges. With a structured jawline and short beard, Efron was able to pull off this look as one of his most handsome yet. 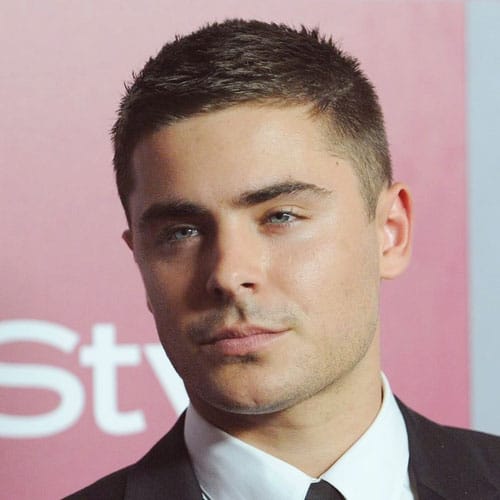 Another of Efron’s short hairstyles is the buzz cut. The military-inspired buzz cut is known for creating a clean-cut and simple look, and Efron proves this to be true. This look is so simple and easy that it can be achieved at home with a good pair of clippers.

As a young and new Disney actor, Efron had teenage girls swooning over his lengthy and side-swept shaggy hair. 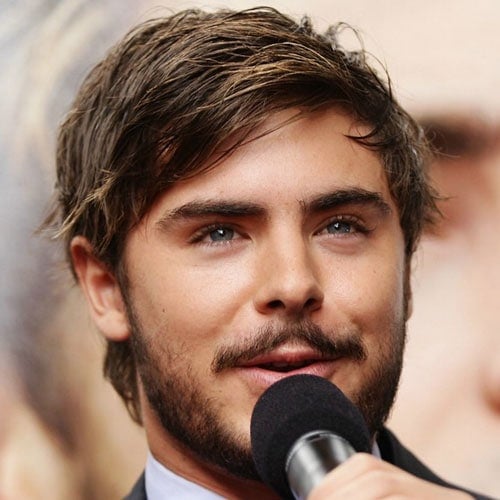 A popular look among teens, this messy look can be mimicked by growing out your hair and then getting it cut into textured, layered sections that can be tossed to the side. Employ a light hair wax or pomade to add texture to the style and keep stray or frizzy hairs at bay. 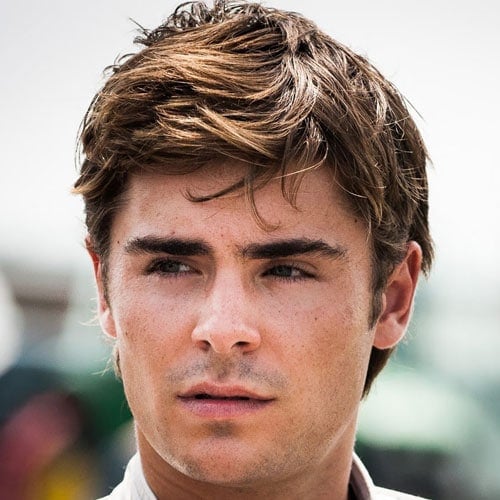 Efron’s quiff can be achieved by pushing the hair on top of the head up and back, and can add a unique and stylish aura to any look. Efron rocked a cleaner version of the quiff on the red carpet, when the longer hair on top of his head was styled upwards and to the side and kept in place with a strong styling product. 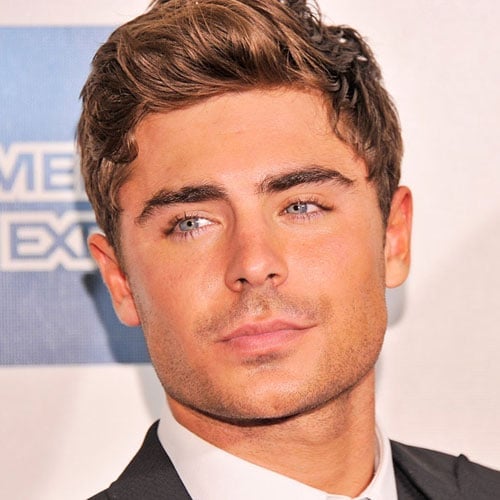 Though the quiff hairstyle requires longer, thicker hair, the messy modern variation can be worn simply by using a light hair wax to give the longer layers a textured look and off the forehead. For men with naturally shorter, thinner hair, this style may not be the best because of it’s need for firmer hair to work with. 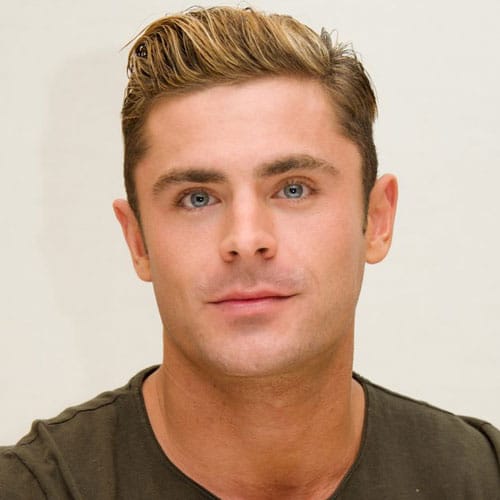 Similar to his quiff haircut, Efron’s spiky hair was a hit with fans and men’s fashion experts. The look is best paired with faded sides and short to medium-length hair on top, although trends have been going towards scissored, tapered sides. To style the textured look, we suggest a strong hair wax or pomade to keep the hairstyle in place all day. 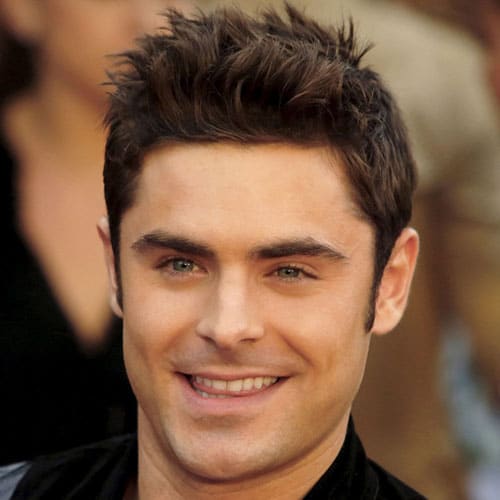 Efron’s naturally full head of hair gave him the ability to rock the faux hawk, a less daring version of the mohawk. Made more popular recently, the fohawk is a major fashion trend for men and a way for them to showcase their unique style. 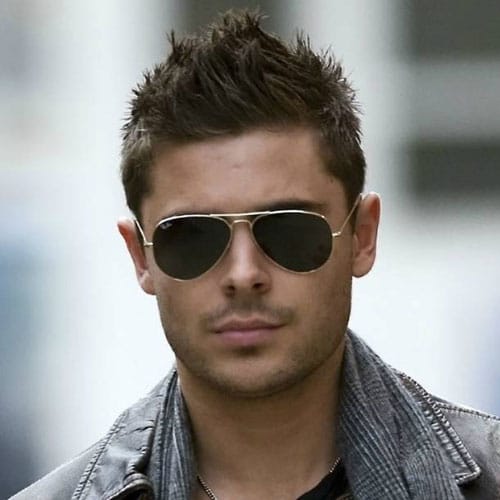 While there are many versions of the cut, the spiked hair in the middle should be soft, textured and blended together for an everyday classic look. If you need an example of how to style this modern cut, Efron’s faux hawk epitomizes what the look should be.

The comb over, also known as the side part, has made an enormous comeback. The classic comb over exudes sophistication and style, and is the perfect fit for a guy wanting to look like a sleek gentleman. And Efron’s comb over accomplishes exactly that. 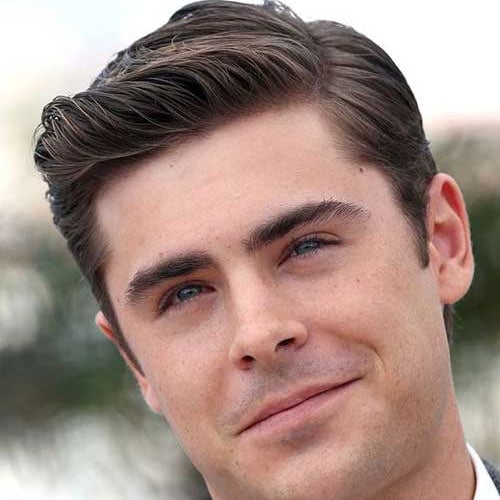 Although sometimes faded on the sides, Efron chooses a scissor cut for a longer, more conservative look. However, for a more contemporary hairstyle, we recommend the comb over fade. 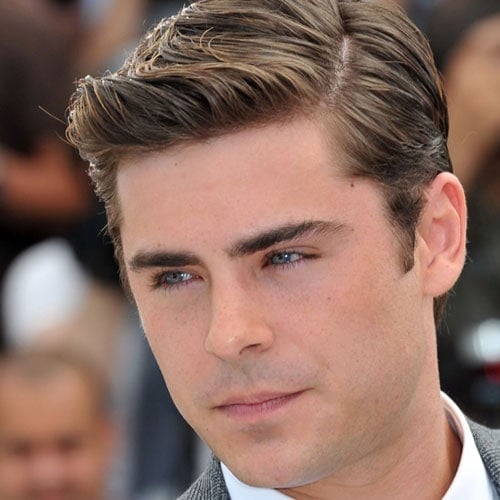 While no one can know the exact brands the actor uses, we can tell you the hair products needed to style Efron’s hair. For a clean finish that lasts all day, we highly recommend guys apply a good pomade or wax. Stay away from gels to avoid clumping and flakes.

If you have thick hair, get a strong pomade with low to medium shine. Otherwise, buy a matte wax for a natural, textured finish. A few of the best styling products that guys seem to love include the following: 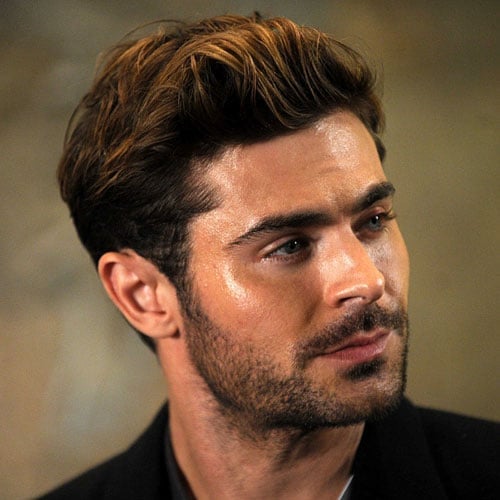 Just because you don’t have a team of stylists doesn’t mean you can get Zac Efron’s hair. A visit to any skilled barber and you can style your hair like him. Whether you want one of his short, cropped cuts or need to grow your hair out to style his tousled looks, any guy can copy Efron’s cool hairstyles. 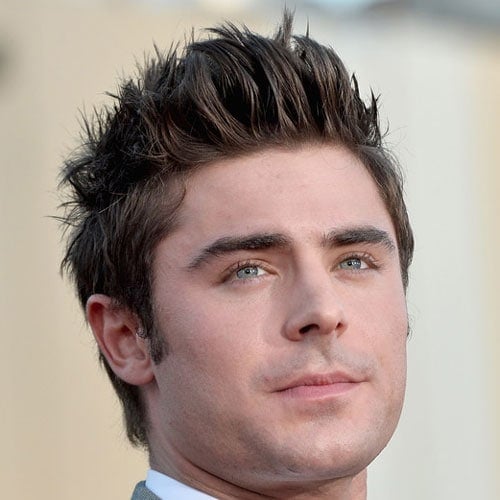 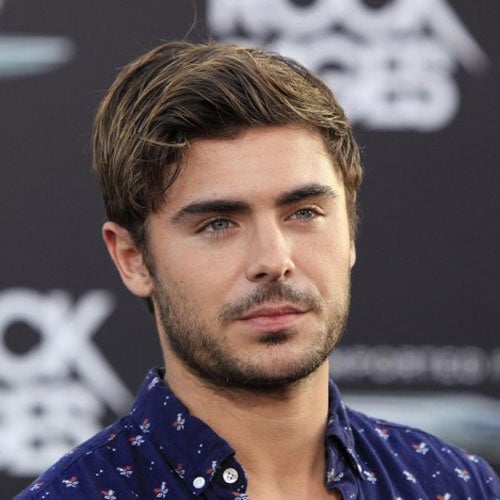 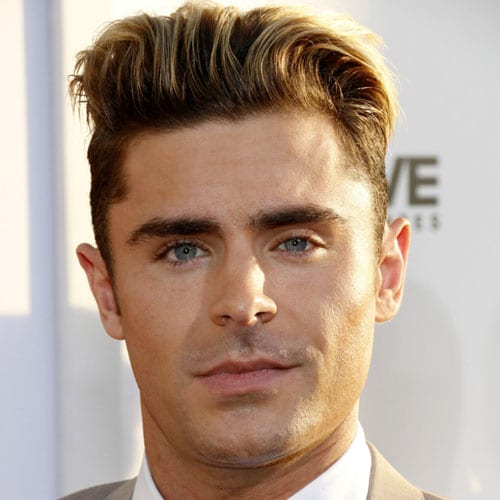 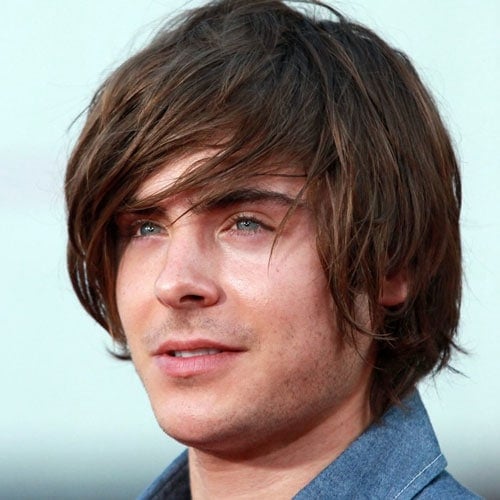 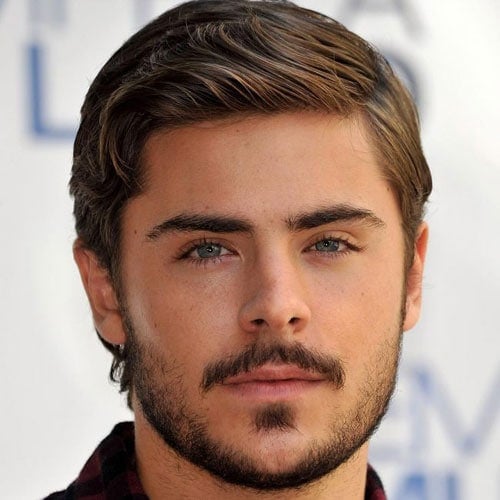 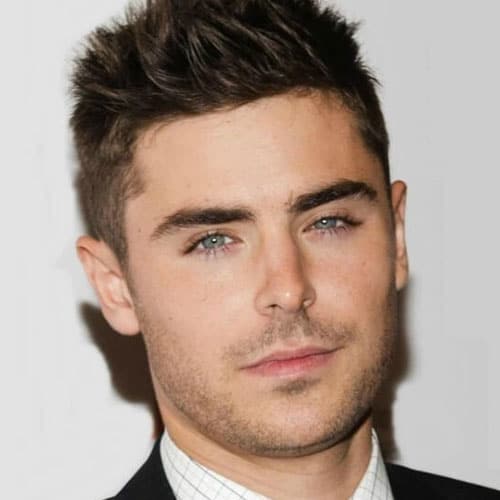 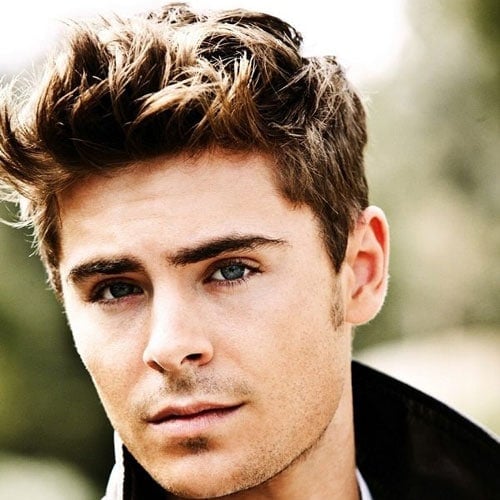 25 Best Haircuts for Guys with Round Faces

25 Hairstyles For Men with Beards