The crew cut is one of the most popular short haircuts for men. The men’s crew cut hairstyle is cool, classic and stylish, allowing you to style your short hair in a number of ways while minimizing maintenance. For example, guys have the choice between a short and long crew cut as well as whether they want to fade the sides or leave some length for a tapered haircut. The crew cut hairstyle even permits variations in styling, giving guys the chance to get a side swept crew cut on some days, spike their hair on others, or leave it natural, textured and messy when no effort is required.

While we highly recommend the crew cut fade for its easy and simple styling, no matter what version you pick, the modern and classic crew cut is still a barbershop favorite. Below, our guide will discuss everything there is to know about the crew cut. From short or long hair on top and the proper lengths to ask your barber for to the many different crew cut styles, we’ll cover everything you need to know about getting the best crew cut! 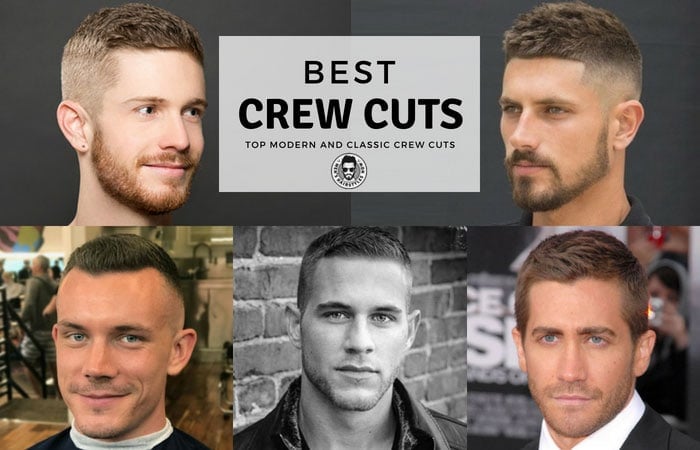 What Is A Crew Cut?

The simplest way to describe the crew cut is that this classic men’s haircut is a longer version of the buzz cut. Also sometimes known as the classy Ivy League haircut, modern crew cuts follow the “short sides, long top” hair trend with a taper fade or undercut on the sides. And while buzz cuts are often trimmed using hair clippers and buzzed down using a number 1 or 2 guard size, crew cut lengths range from 1 to 3 inches on top.

Because most guys prefer to get the crew cut fade, where the back and sides are faded short and slowly blend into the longer hair on top, you can expect your barber to know exactly how to cut your hair. This tapered crew cut allows for some contrast instead of one-length all over, offering a clean cut hairstyle. 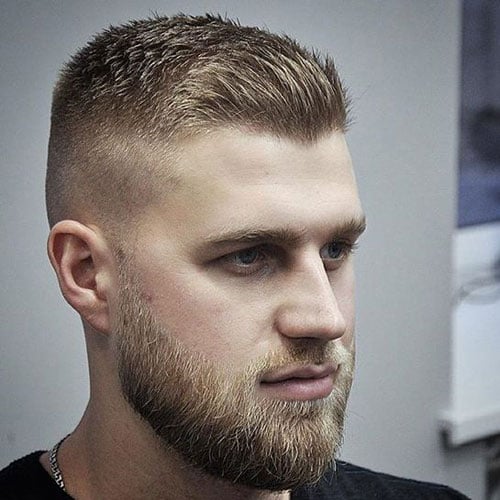 Ultimately, the crew cut is a versatile hairstyle that suits any face shape. It can be styled neat and swept to the side, or messy and textured for a natural finish. The way you choose to style your crew cut hair will determine whether you use pomade, wax, or clay as a styling product.

With so many different types of crew cuts, it can be helpful for guys to have visual examples for their own haircut ideas. If you’re planning on getting a crew cut, check out the styles below to see which short or long, modern or classic haircut is best for you.

The classic crew cut generally keeps with the theme of short hair on top, but allows for slightly longer hair on the sides. Instead of a fade, this traditional cut is more conservative and often a safer choice for older men. 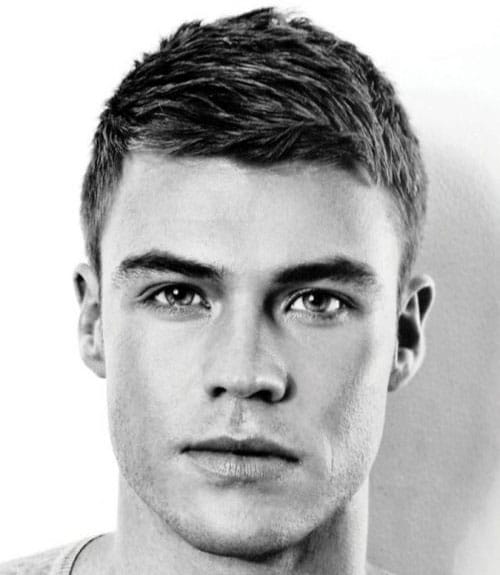 The modern crew cut is the edgy way to get this haircut, resulting in a style that stands out. Guys can ask for shaved sides with two inches of hair on top for maximum contrast. You may even want to combine a crew cut with a beard to pull off the dapper modern gentleman. 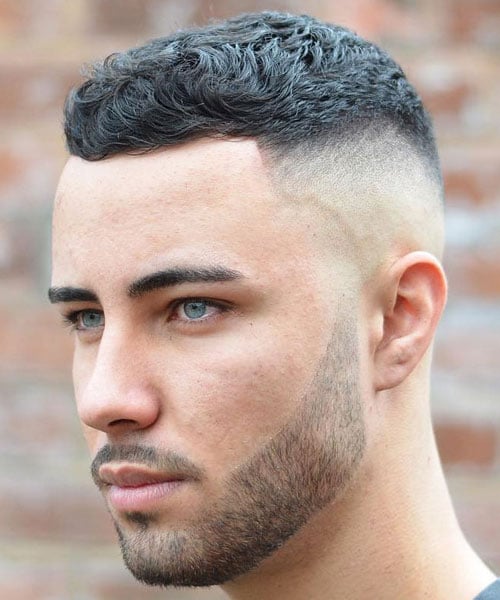 The crew cut fade is the most common way to get this haircut. With so many different kinds of fade haircuts, men can tailor this look the way they want. For example, there are high, mid and low fades, each of which determines where the tapering will begin. You also have the option of the skin or bald fade, which blends the hair gradually into the skin.

No matter which crew cut fade you pick, all of these cool styles are easy to comb and will have you looking stylish.

The side swept crew cut remains one of the hottest ways to style the look. Simply brush your hair to one side. Whether you choose to sweep all your hair or just the hair in the front and leave the rest textured or messy is entirely up to you. The ease of styling the side swept crew cut makes it a low-maintenance look you’ll appreciate. 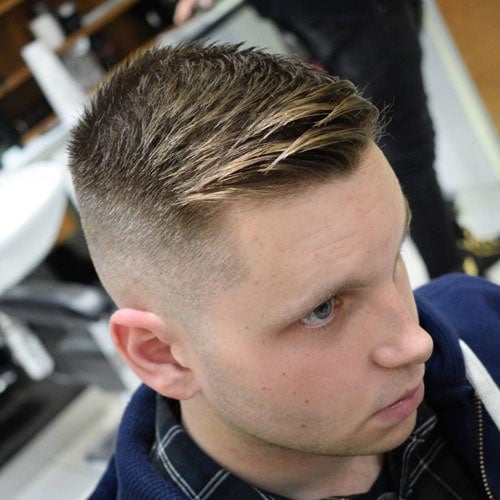 The long crew cut provides flexibility. With longer hair on top, guys are able to style for hairstyles, including a slick back, faux hawk, comb over fade, or quiff. Although you can keep the sides shaved or buzzed, you just need to tell your barber you want a crew cut but longer, such as two to three inches in length. 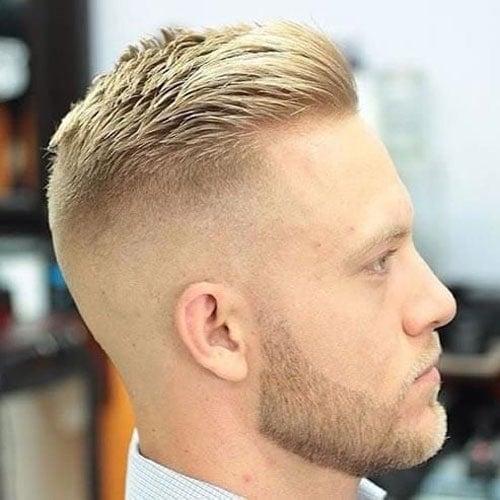 The short crew cut verges on being a long buzz cut. Generally, a buzz cut requires an inch or less in hair length, so expect a short brush cut to be around one to two inches.

How To Do A Crew Cut

Cutting a crew cut at home isn’t hard, especially if you want the top all one length and the sides slightly shorter. All you need is good hair clippers with multiple guard sizes. 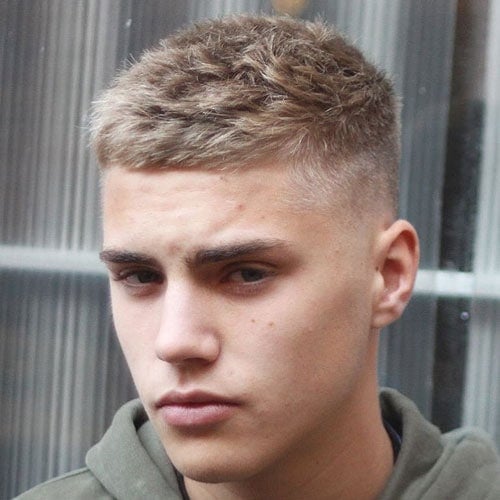 However, if you want a crew cut fade, the fading of the sides may not be something most guys can do well. Doing a nice fade requires skill and a keen eye, particularly as you gradually blend the hair from one length to another. If you want the perfect haircut, we recommend you visit a barbershop and ask for a crew cut instead.

Here’s how to get a good crew cut haircut.

The beauty of the crew cut is that you can let it grow out and use the longer hair to style a comb over, quiff or other cool men’s hairstyles.

How To Style A Crew Cut

The modern men’s crew cut is short enough that styling is optional. In fact, the crew cut is a hairstyle that can go all day effortlessly. If crunched for time on a Monday morning, even bedhead will look trendy and hot. But while messy and natural can work, there are variations to change up your look. 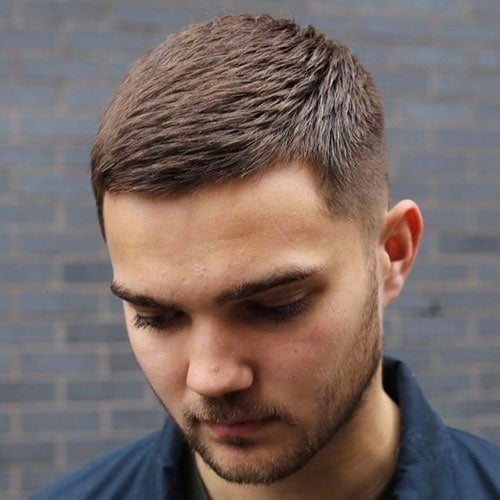 For example, men can combine their crew cut with a beard for a manly style. The best crew cut beard styles will start with a fade on the sides, maybe a textured top, and a thick beard that completes the badass look.

Another popular way to style the crew cut is the Ivy League haircut, where men can brush their hair to one side for a clean cut hairstyle. This looks good if you have straight, thick hair. 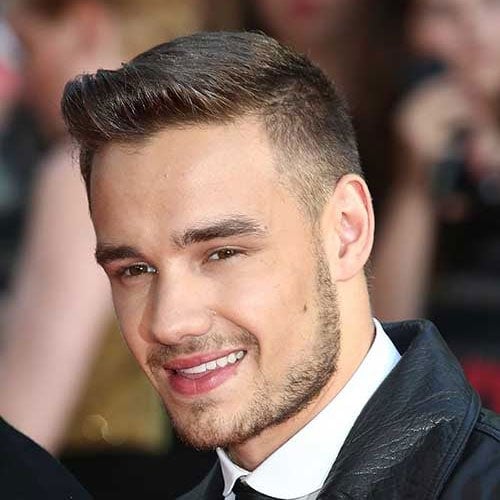 The crew cut is manageable, but you’ll need to go for fresh haircuts with your barber every few weeks to maintain. Alternatively, grow out the top for a long crew cut for a tousled look.

The best hair product for a crew cut is a pomade, wax or clay – which one you choose depends on how you want to style your hair. Because different grooming products provide different levels of hold and shine, guys have a few brands to pick from.

If you want a textured crew cut with a matte finish, use a good medium to high-hold hair wax. For a messy or neat crew cut hairstyle with a shiny look, consider a top-rated pomade. Finally, if you want a light hair product that allows movement and volume for the most natural finish, apply clay.

Here are the best hair styling products for men on the market!

From David Beckham to Zayn Malik to Zac Efron, there is no shortage of proof that crew cut haircuts are a grooming move that will always be slick and awesome. Check out our guide below for more examples of the best men’s crew cut haircuts. 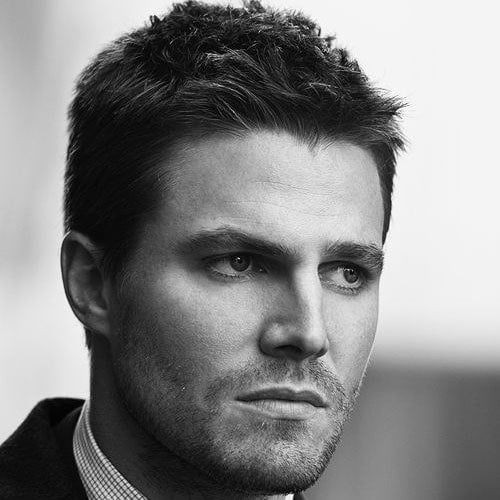 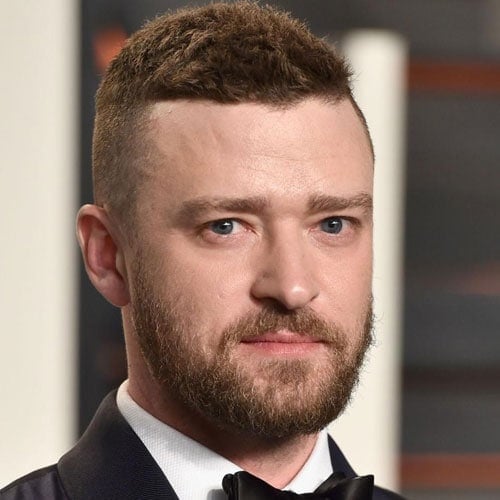 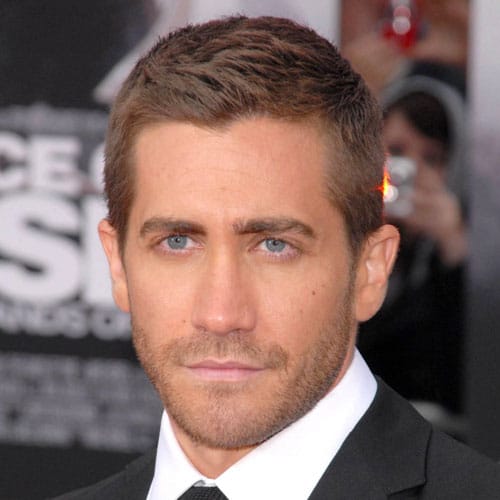 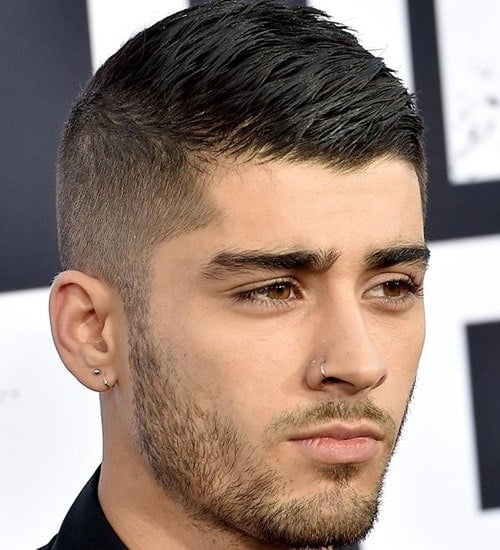 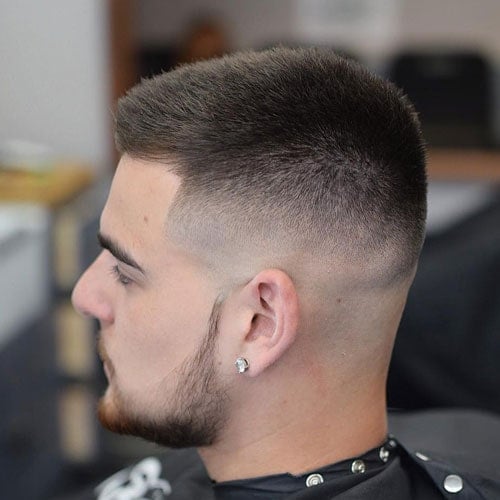 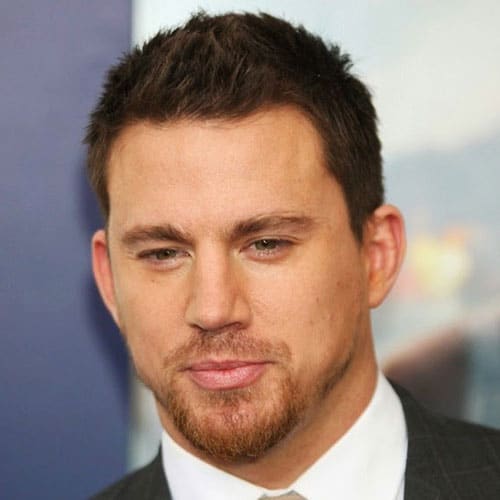 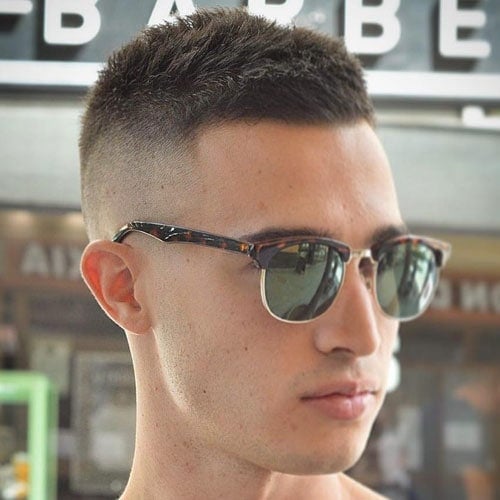 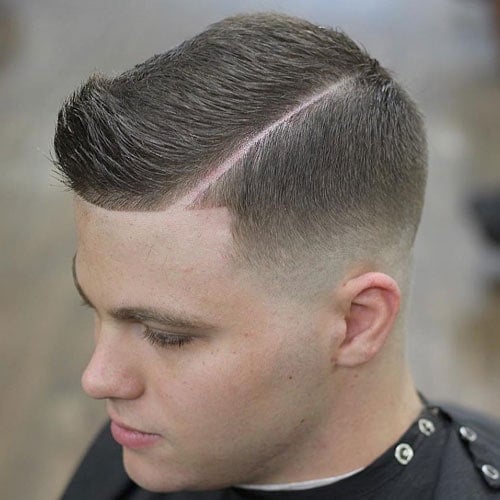 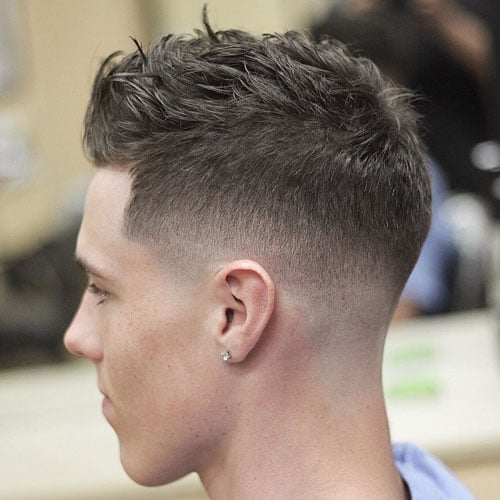 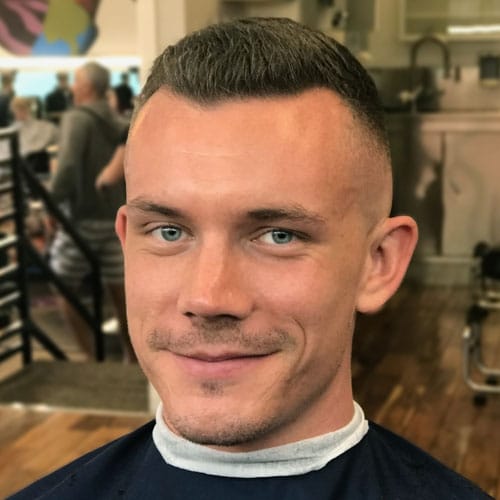 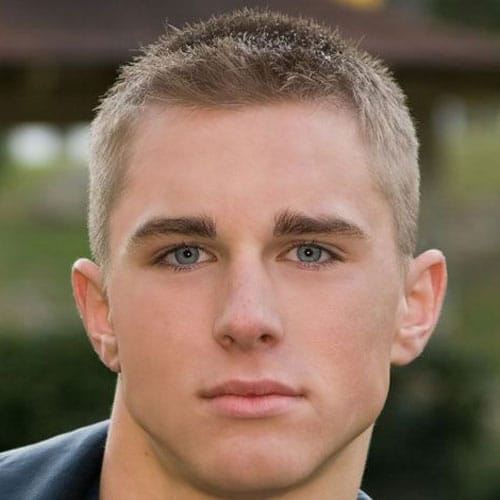 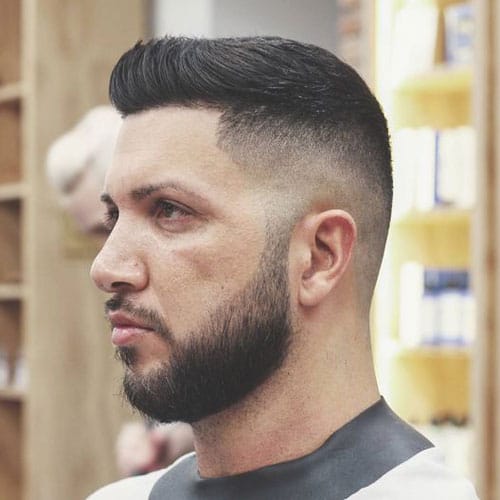 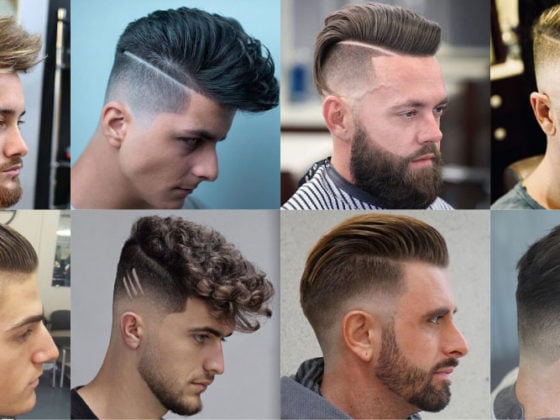 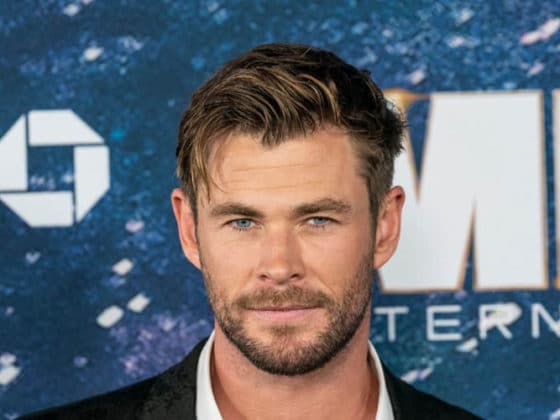 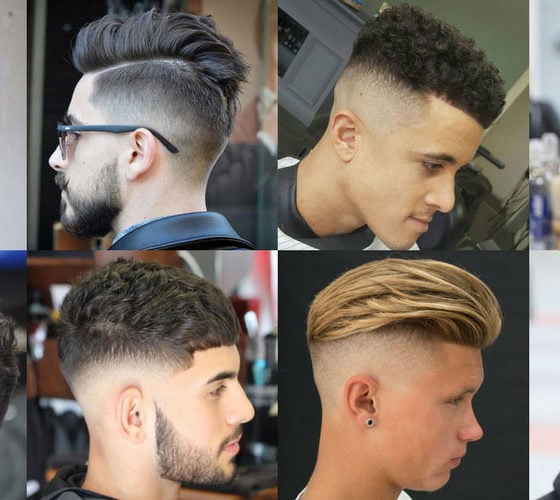 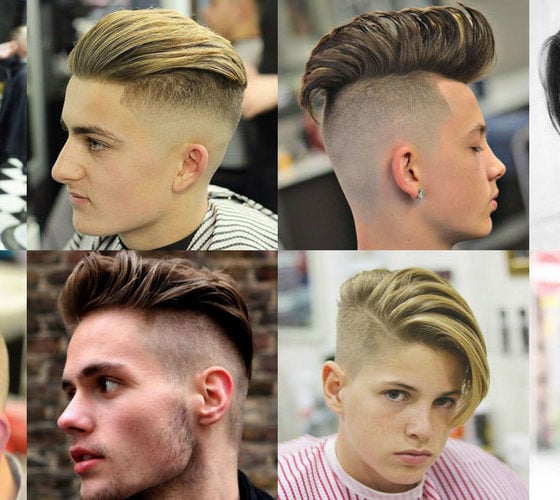